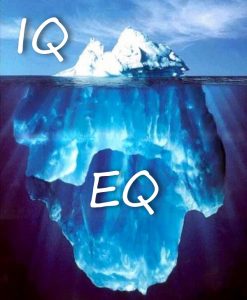 Intellect (IQ) has long been identified as a critical factor for success in business. Financial decisions, detailed analysis, creation of strategies, defining effective processes and procedures are fundamentals in making businesses run smoothly. Smart people are needed to skillfully move the business forward, look at things in innovative ways and see beyond the present.

IQ predicts what profession an individual can hold. For example, it takes a certain amount of cognitive capability and functioning to achieve a higher-level college degree, pass professional tests, etc. It is a fixed capability. The limits are broader with Emotional Intelligence. People can deliberately plan a path for increasing aspects of their emotional intelligence. It increases with age and experience.

Typically, IQ sorts people before they embark on a career channeling them into a particular profession or field. Once people are in a given job, role or profession, Emotional Intelligence emerges as a powerful indicator for who is promoted, plateaus or fails. Our emotional intelligence shows how much potential we have realized by learning and mastering skills that translates into on-the-job capabilities.

Businesses all over the world are recognizing the impact of emotional intelligence on their bottom line results. The Consortium for Research on Emotional Intelligence in Organizations has compiled the following cases:

Understanding how emotional intelligence contributes to the workplace makes good business sense.  Ongoing research supports the importance of using this framework to hire, build awareness of capability levels and to utilize the results to coach and give feedback.  It can be a differentiator in creating positive work environments that achieve higher productivity, effectiveness and results.

“You won’t remember when you retire what you did in the first quarter…or the third. What you’ll remember is how many people you developed, how many people you helped have a better career because of your interest and dedication to their development. When confused about how you’re doing as a leader, find out how the people you lead are doing. You’ll know the answer.”